Durga Puja through my eyes

So, finally Durga Puja is over. Probably my best holidays since I joined college in terms of enjoyment. I did not take part in the actual ‘pujo’ part of it, though, for obvious reasons. I do not know if it was me or whether the crowd seemed to have dwindled in number compared to previous years. Another thing I noticed was that there were hardly any people (especially of my age group) who were not with someone from the opposite sex. Hmmm.

That made our group of the 2006-batch from school quite unique, when you consider that we were more than a dozen or so in number while roaming about and never less than five at any point of time, without a girl anywhere near us. No, we are not gay, at least most of us aren’t. Some people like to call themselves bachelors (BBC for the people directly involved). However, I am assured that towards the evenings, a large number of our group did betray us to spend time with their female friends. (Because of uncertainty, I shall not use the word girlfriend.) There is hope for us yet. 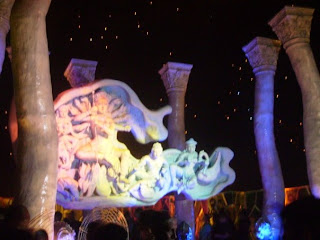 The Pratima(idol) and interiors at Babubagan in South Kolkata.
We hopped from one pandal to another, most of which were impressive and innovative. They ‘were’ seriously good pieces of art/architecture with immaculate designs and delicate craftsmanship. The same is true for all the pratimas (idols). Dismantling the pandals and immersing the idols in the river of Hooghly at the end of it all seems like sacrilege, if you think about it. Imagine dismantling the Taj Mahal or the St. Peter’s Basilica, or throwing the ‘Statue of David’ or the ‘Mona Lisa’ into the ocean. Michelangelo or Da Vinci would not be too pleased by that, would they? Neither would they be as famous as they are now had that been the case. Imagine the kind of fame these artisans who make the Durga idols have got if their works were preserved.

An article on these lines was published a few days ago in TOI describing how the artisans need to be indifferent towards their own pieces of art. And the last time I heard, they weren’t rolling in cash either. That means they get neither the adequate amount of money nor the recognition they deserve for their work. Isn’t that grossly unfair on them?

I guess the whole thing culminates to our tradition that the idol must be immersed in the ‘holy’ waters of the Ganga. Besides the afore-mentioned loss to the artisans, it must be contributing immensely to the already grave water pollution scenario. After all, the paint used does contain lead and other toxic chemicals which are mixed with the river water after the immersion. Maybe it is time we have a re-think over whether our traditions are really worth following.

Lots of people may be up in arms over such a thought, but it does not take Einstein to figure out that such festivities at the end leave both the people and the environment poorer. In this respect, it was ironical that one particular pandal had chosen ‘Pollution Control’ as its theme for the pandal and lighting this year. I wonder whether they did anything substantial to control pollution themselves.

Most of the traditions we follow have no scientific base really, so it's best not to go down that alley.