Musings during a Train Journey

Travelling alone by train is one of the most lonesome experiences possible. Had the misfortune of being at the receiving end of one such journey the other day, when I was returning home for puja vacations. As DD rightly put it, “When you travel alone by train, you get a first-hand experience of the fact that staying single is so boring.” Because of the ample amount of free time, I could contemplate about many things which I generally would not, and so I penned (or rather typed) them down. 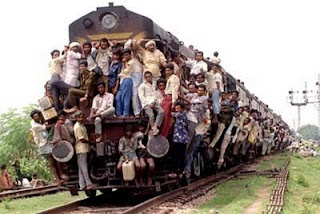 The ‘common man’ in India is probably one of the most insensitive among all common men of the world. How can we be so indifferent towards what is going on around us?

We complain about the fact that the government does not do anything for us. “Chaaron taraf kitni gandagi hai.” You will hear this often, and yet it will be the very same people who litter the streets without thinking twice about it. Can’t they find a dustbin anywhere? They should take a leaf from Saffrondude’s book (read his post on Littering).

The huge population of the country, especially the large number of poor people is often decried. Yet, when a poor man tries to honestly earn some money, there is everyone trying to push him down. I was witness to one such occasion during this uneventful train journey. A vendor was selling ‘samosa and kachauri’ and charged six rupees a plate. Having eaten one plate myself, I must mention here that they were delicious. Yet, when it came to paying for it, a fellow passenger had a fight with the vendor over the price saying he would pay no more than five rupees. The man was well-dressed, flaunted an expensive mobile phone and looked like one whose troubles in life were mostly artificial. Surely, he had felt the pinch of inflation himself, or did he think that he was the only one to be affected by it and people like the vendor still enjoyed prices existing 10 years ago. Then what was it that drove him to engage in a war of words over ‘one rupee’, one tiny, useless, insignificant rupee; something which probably did not have any value for him but must surely have had meant something for the vendor.

To add to this particular passenger’s impudence, ten minutes after this incident he went to the door and had a smoke. “Surely, sir, your cigarette cost more than the one rupee you just robbed from that poor man.” I felt like slapping him, one because of the aforementioned incident and second because the smoke was irritating me. But then, I can’t go around slapping people. I couldn’t even muster enough courage to tell him that he was wrong. Why? I was just as likely to be shouted down as the poor vendor. Boy, do some people think they are the ‘centre of the universe’ or what?

This is more a generalization than an exception. While I accept that most people are not as insolent or uncouth as this person was, the indifference and insensitivity is there for all to see. How often is it that we see an accident on the road, and only a couple or so people rush to help while the rest watch it and then continue without looking back?

“It is his/her problem; there are so many others here to look after them, what do I care?”

Someday, sir (or ma’am), you will find yourself in the same position and then there would probably be no one to help you out. Maybe, then you would realise that there are some things in this world called humanity, kindness and benevolence as well.

It's sad that people like Mr Smokey, which is really a vast chunk of the population lack a little perspective in life. I personally would fight for every rupee if it was being taken from me for something dishonest but surely in situations like these a few extra bucks can be spent without the world crashing down on you..

One more thing, I think any person who litters immediately loses his right to complain about dirtiness of roads and all and he immediately should be slapped twice in the face if he does so.

I believe that it is not just about a rupee for the vendor. It is more about giving the undue. Like yesterday i had an opportunity of asking two rickshaws to the same place. First wouldn't go below 15/- but the second was ready to go for 10/- and i knew that the place was worth 8/-. I was lucky to have gone for the second one.

As far as littering is concerned.. i think i take a cue from the comment posted before mine.

i agree with both saffrondude and devdeep....nd i knw its wrong when people litter public places with filth...bt its very difficult to make ppl realise that they r wrong especially wen the most common xcuse is that evry1 is doin it...so the most important thing is to keep doin ones part...nvr get discouraged...and hope that other people gets inspired....